Inflation, be careful with what you wish for 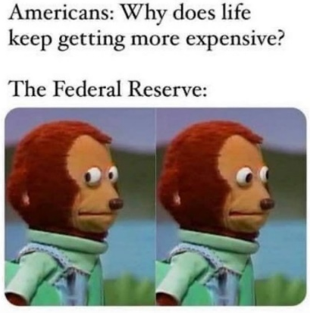 “There are decades where nothing happens, and there are weeks where decades happen.”

Yesterday, the market was surprised with higher-than-expected US’ April CPI inflation data of 4.2% YoY and 0.9% MoM, hitting 13-year high. This is far higher than the consensus of 3.6% YoY and 0.3% MoM. Moreover, the CPI inflation surge was more than just a base line effect. The cumulative CPI Inflation from 2019 would be 3.36%, negating 0.8% YoY deflation last year. Such level is higher than the Fed and 5Y breakeven inflation expectation of 2.4% and 2.7% respectively.

Some may take comfort in the Fed’s Jerome Powell and the US Secretary of Treasury Janet Yellen statement that inflation would be transitory. Also, the historical reality that suggests the post-GFC QE has failed to produce in inflation in the traditional CPI sense.

Still in the spirit of applying a growth mindset, we do not want to rule out the possibility of inflation to be more structural. Instead, we rather ask ourselves, what could be different this time?

The non-existent CPI inflation of post-GFC was due to the design of QE that benefits the upper class. The surging wealth effect did not lead to higher consumption but was reinvested by the rich. There is a lot of inflation if you look at the asset prices.

This time around, the stimulus checks directly target low-medium income groups who have a much higher propensity to consume. They spend the money rather than to reinvest it. Furthermore, now we have a credit guarantee scheme that spurs commercial banks’ money creation process along with the fusion of fiscal and monetary policy by modern monetary theory.

In 2020, the FED Balance Sheet registered an expansion that matched the previous entire decade of expansion. The US budget deficit in 2020 was 16% of GDP, only comparable to those experienced during World War II.

Such actions have led to two achievements: (1) 24.6% of the global U.S dollars printed last year and (2) the U.S won the most significant worldwide increase in YoY money supply by a landslide. The greenback simply becomes the U.S greatest export commodity as the result of modern monetary theory.

In early March 2021, the U.S government has passed the American Rescue Plan Act, a stimulus bill of USD 1.9 Tn. Now, the Biden administration also proposing another USD 3 Tn green energy infrastructure plan and USD 1.8 Tn American Families Plan. All of these initiatives would be equal to 35% of the U.S 2019 GDP.

U.S monetary policy side also suggests that the Fed shows no sign to stop pouring liquidity into the financial market. Year-to-May 2021, the Fed balance sheet has expanded about 6%, USD 230 Bn from USD 7.3 Tn in December 2020. That is equal to an 18.2% annualised growth rate. After such a massive expansion in 2020, U.S M2 is now growing at the annualised pace of 12%.

This habit of printing money seems to be addictive and the word trillions have become more frequently mentioned these days. What is the point of working hard and financially responsible to save and not invest your money recklessly?

Commodity prices are going through the roof

Food, energy, and raw material commodities are soaring. With surging commodity prices, production costs are destined to rise. As people now have money in their hands, the inflationary forces are spiralling from the demand and supply side. Most of the commodities experienced a shortage from agriculture to base metals as shown by backwardation on their future contracts. As direct costs are rising, prices have to rise. Will people demand salary rise too?

We will discuss more on the factors behind the rally in the future, stay tuned.

The way we look at it, Biden’s Made in America is just a flattering version of Donald Trump’s Make America Great Again (MAGA). Made in America will likely result in an increase in prices as companies face diseconomies of scale. It reverses the efficiency obtained through the specialisation of free-trade.

Surging geopolitical contests also could cause commodity prices to go ballistic. Two-centuries worth of data suggest that every major war and geopolitical contest have been associated with high-level commodity prices and inflation rates. We see no cool-down on U.S-China tension. In fact, the strain in the South China Sea has escalated even further.

Financial repression has induced the hunt for yield 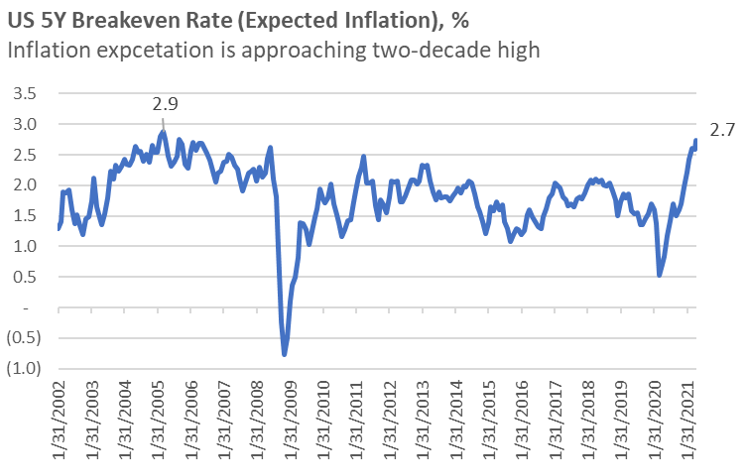 A manifestation of early inflationary era is higher risk investment appetite in the search for yield. At the moment, the market has been digesting two things: (1) expected inflation of 2.7% for the next 5 year, higher than Fed target of 2.4%, and (2) negative real yield climate whereas 5Y expected inflation of 2.7% is only compensated by 0.78% of 5Y U.S treasury bond yield, implying -1.92% expected real yield for the next five years. Of course the negative real yield is even lower if we compare it to the recent inflation of 4.2%.

As such, the Fed’s commitment to continue buying government bonds could be translated as a quasi-price cap at a higher price level. Price cannot fall to adjust the demanded market yield that compensates inflation. It is an attempt of global asset price fixing and causing dislocation of asset price and allocation. A yield cap in an inflationary environment is essentially a form of financial repression. The outcome is that the hunt for yield has now begun.

To shelter from a highly inflationary environment, investors buy assets. Cash becomes trash. The higher risk appetite as the result of yield hunt has been reflected on various asset prices. We are not surprised with how risk-loving the current market is given the S&P500 dividend yield of 1.8% is even higher than the US 10Y bond yield of 1.6%.

Junk bond spread is at an all-time low. No incentives to be financially prudent (?)

Stock markets are around record high level – it is all in the news.

Cryptocurrencies, a joke-intended crypto that was made in a Sunday afternoon (Read: DogeCoin) in early May’21 market capitalisation reached USD 87 Bn, bigger than British Petroleum, General Motors, FedEx, BASF, Sinopec, and Conoco Phillips. Now, the total market capitalisation of cryptocurrencies reached USD 2.1 Tn. To put it into context, this is twice the size of Indonesia’s GDP in 2019.

One can always be prepared.

In the early stage of inflation, equities have always been a beneficiary. Such companies would be: (1) superior companies with moat and unquestionable pricing power, (2) commodity producers, or (3) companies whose business model is designed to pass on the cost to the consumer. Another thing for sure, cash or bond is not the place we want to be.

However, the story could be different in galloping inflation or hyperinflation time. Nowhere is safe, since social and political unrest might rise and causing economic instability. Companies’ pricing power might be maxed out. As printing money is not the answer, taming inflation will cost GDP to decline. Asset prices then will start to deflate.

Since early signs of inflation is already here, the next question to ask is what should we do in the case of inflation spiralling upwards in a more persistent manner?

Well, it has something to do with value stocks but that’s a story for another day.

As a side note, in case the world is going to see hyperinflation, our team has spent a considerable amount of time and energy to study about the Weimar Era Inflation and differences between QE and MMT. Read our 2Q20 report.

“After the printing press, comes the guillotine.”