The Unstable Stablecoin: What have we learnt from Terra’s collapse?

As the name implies, stablecoins always aim for one goal: stability. They bridge the gap between fiat currencies and cryptocurrencies by letting crypto users to make transactions easily and quickly without needing to leave the digital asset ecosystem or rely on intermediaries whilst worrying about the value of their coins fluctuating.

There are four primary types of stablecoin, classified by their underlying collateral structure.

Fiat-backed stablecoins are the most popular type among the four. They are fully backed by fiat currency such as US dollar and short-dated US government obligations which are always redeemable at 1:1. Fiat collateral remains in reserve with a central issuer or financial institution, and it must remain proportional to the number of stablecoin tokens in circulation. The most prominent fiat-backed stablecoins include Tether (USDT), USD Coin (USDC).

UST uses LUNA to maintain its 1:1 peg to the US dollar which could be swapped for UST and vice versa to keep the price of UST where it should be.

To make it easier to understand, imagine that the price of UST is currently above $1, let’s say $1.01. A LUNA holder can then swap 1 USD worth of LUNA for 1 UST. In this case, the market, using an algorithm, will burn 1 USD worth of LUNA and mint 1 UST. The holder can sell 1 UST for $1.01 – profiting $0.01 from the arbitrage mechanism. The logic works the same for the opposite – when 1 UST is trading at $0.99, a UST holder can swap 1 UST for 1 USD of LUNA. The swap will result in the burning of 1 UST and minting of 1 USD of LUNA, holder profit $0.01 from the swap.

Terra Protocol and its ecosystem have been all over the headline of news for the past week. TerraUSD (UST) – the protocol’s algorithmic stablecoin has lost its peg twice in three days which ultimately led to a permanent de-pegging. At the time of writing, UST fell as low as $0.15. Meanwhile, LUNA – the protocol’s governance token is almost worthless, trading at almost $0 from a high of US$119.18 last month. This has led to the Terra Validators officially halted the blockchain on 13th May. 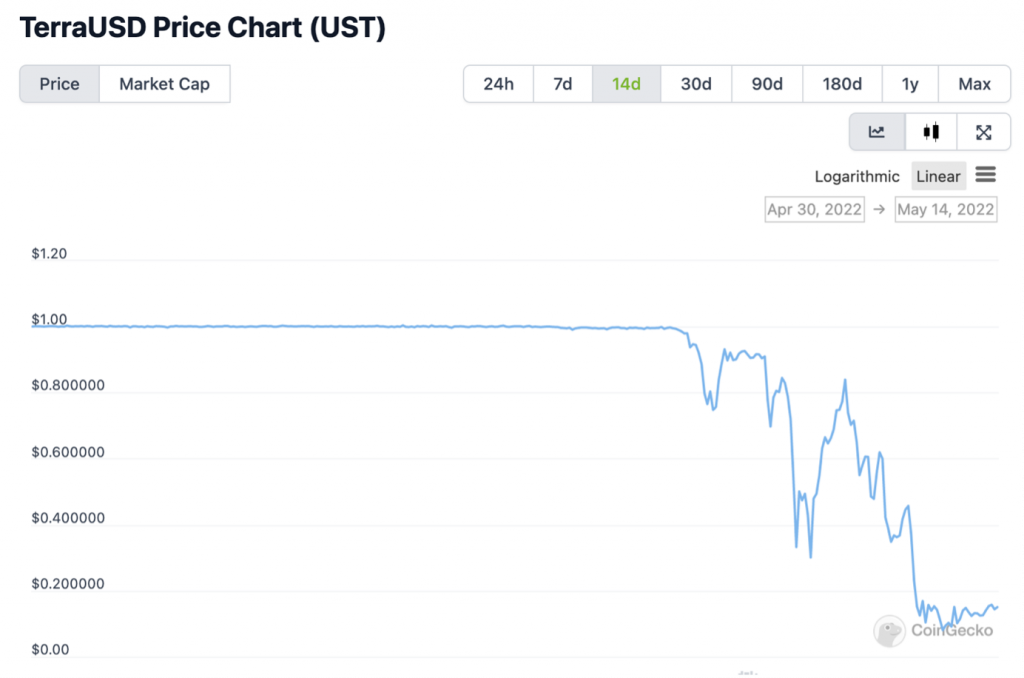 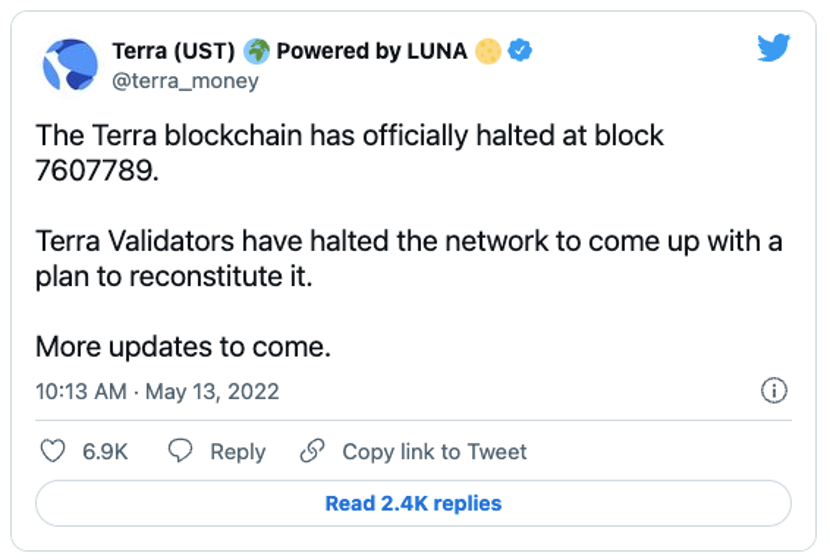 The event has sent shockwaves throughout the crypto ecosystem, making one to wonder what caused the blowup. The root cause of the fatal crash has not been confirmed, but speculation laid out by the Onchain Wizard suggests that it could be caused by a coordinated attack which has led to the drop of UST deposits on Anchor protocol from $14 billion to $11.8 billion over the weekend. As the Wizard sees it, the problems for Luna began in March when the Luna Foundation Guard (LFG) began purchasing Bitcoin (BTC) for UST’s reserve pool. And at some point, the attacker began building a BTC short position and a $1 billion OTC UST position, knowing that LFG will be creating a new liquidity pool – the 4pool, and requires transferring liquidity between pools. On 8th May, LFG removed $150 million in liquidity in anticipation of 4pool from Curve. At the same time, an attacker drained $350 million of UST, kick-started the de-pegging. Once LFG began selling its BTC from reserves to save the peg, it put downward pressure on BTC. The attacker also began to offload the remainder of the OTC UST position. With strong UST liquidations, LUNA price starts to collapse because of the Terra’s algorithmic mechanism. The token then went down a “death spiral.”

However, it seems as though fiat-backed stablecoins such as USDT and USDC have managed to kop their head above the water and investor sentiment remains relatively intact. Although USDT briefly dipped to $0.95 last Thursday amid the UST meltdown.

A chain reaction started a crypto bloodbath, over $350 billion has been wiped off the value of the global crypto market since the UST collapse. And the total value locked (TVL) in decentralized finance (DeFi) protocols has dropped from US$142 billion to US$87 billion, losing over 39% over 7 days. Tokens like Avalanche and Solana that underpin some key DeFi protocols posted over 40 percentage loss at one point.

UST was a darling of DeFi. The protocol that seeks to power a stable global payment system with affordable and fast settlement amassed a market cap of $18.7 billion and was the fourth largest stablecoin by market value within 20 months since its launch.

A key implication from this fiasco is the vulnerability of algorithmic stablecoins. This type of stablecoin is uncollateralized in nature. It requires a complex engineering to hold its value steady. In addition, its reliance on the Anchor protocol which offered a high yield (a whopping 19.57% APY!!) to UST depositors adds skepticism to the sustainability of the protocol. For instance, the success of UST relies entirely on the belief that LUNA, a token that is created out of thin air, has value. Once a portion of investors begin to lose faith in Terra, a sell-off could trigger FUD (Fear, Uncertainty, and Doubt) which thereafter cause a loop between further selling of UST, which exacerbates the de-pegging of the stablecoin, and thereafter leads to more FUD and more selling – the tokens go down a ‘death spiral’.

What we observe as the flaw that has led to the meltdown of LUNA and UST is that the stablecoin is still prone to bank runs that happen in the traditional world, except there is no reserve backing the UST which made the problem worse. So when everyone try to withdraw their money at the same time, draining liquidity of a token, the token price plummets.

Nonetheless, the search for fiat alternative will continue, stablecoin is just one of the experiments that take advantage of the blockchain technology. Better iterations and new experiments will be attempted. Indeed, during the same week, Economist Nouriel Roubini, who has been a long-term crypto skeptic known as “Dr. Doom,” revealed over the same week that he is developing a tokenized asset called the United Sovereign Governance Gold Optimized Dollar (USG) that will be backed by real assets including U.S. Treasuries, gold and real estate investment trusts. Whether this attempt to create a more resilient dollar will play out or become just another experiment, only time will tell.

Despite being an unfortunate loss to many, Terra was the biggest algorithmic stablecoin that tried to achieve the decentralized mission of crypto. Afterall, any asset-back stablecoin is fundamentally centralized around a financial institution that opened the bank account. The collapse of Terra reinforced the credibility of the underlying blockchain technology and drew the attention of lawmakers and officials. Their call for stablecoins to be regulated may be a positive news to crypto enthusiasts and investors.

“There was a report this morning in the Wall Street Journal that a stablecoin known as terrausd [UST] experienced a run and had declined in value.” Yellen said.

“I think that simply illustrates that this is a rapidly growing product and there are risks to financial stability and we need a framework that’s appropriate.”

As blockchain and crypto are unprecedented technology and asset, policymakers have been careful trying to understand and develop rules for the sector while leaving the industry guessing. Although the outcome of any new regulation is unclear, the terra meltdown becomes a catalyst to speed things up and would ultimately more stability to the market. The elimination of uncertainty surrounding cryptocurrencies could potentially entice a wider range of investors, particularly cash-rich institutions, providing a boost to innovation.