On the previous blog (link), we mentioned that some discouraged investors from China tech stocks might shift their portfolio allocation into Southeast Asia tech names who have similar high-growth profile yet lesser regulatory risk.

Below is our reflection on the Southeast Asia tech investment opportunity: 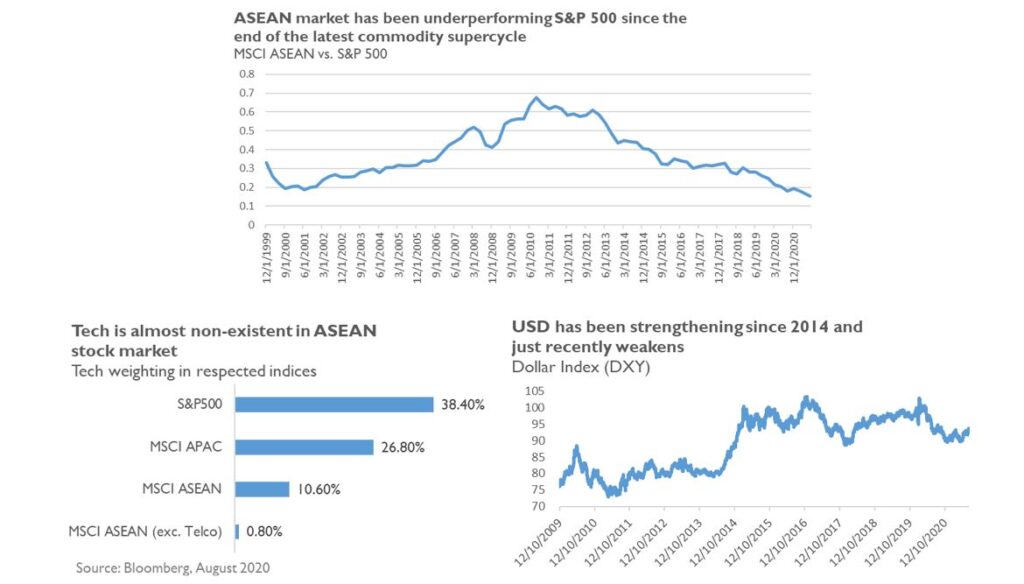 Southeast Asian equities were the investor’s darling because of the region’s high economic growth and exposure to commodities during the 2000-2012s commodity supercycle. However, the last decade has been rough. The ASEAN market simply lost its charm as it has been underperforming relative to the S&P500 for almost a decade.

From our understanding, elevated currency risk and non-existent tech exposure are the major reasons for ASEAN’s relative underperformance to the U.S market.

Currency pressure – ASEAN currencies had suffered from three things between 2010 to 2020: (i) the Fed Taper Tantrum to prevent inflation post-GFC due to the massive quantitative easing, (ii) Donald Trump’s economic policies that caused capital flows to the U.S. denominated assets, and (iii) post-commodity-boom-triggered current account deficits in the commodity-exporting countries. As a result, the currency risk in the ASEAN rises, enter the super dollar era.

Furthermore, the ASEAN market also lacks the 2010-2020 bull’s DNA. The region has low-to-none tech exposure as suggested by the figure above. Hence, it missed the huge tech bull market between 2010 to 2020. This factor, however, is finally set to reverse as many South East Asian technology firms will be entering the stock market within the coming year.

The mounting interest in the Southeast Asian technology companies 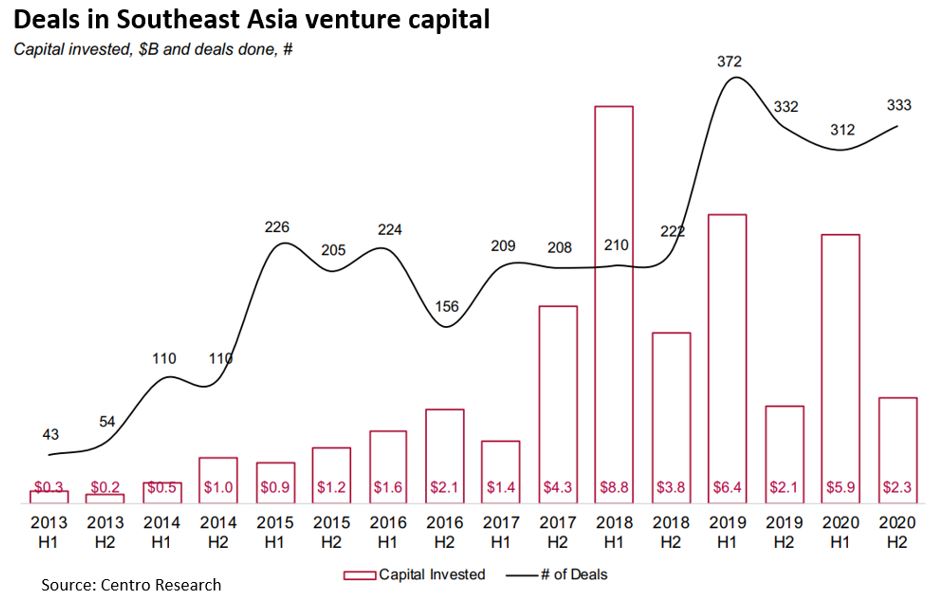 Southeast Asia is an inherently lucrative playground for tech companies to grow. The region’s fast-growing economy could enhance the high-growth trait of tech companies. Furthermore, given that most Southeast Asian countries are in the emerging market category, it offers even more problems that could be addressed. It is all the right business at the right place. There you go, a triple leverage for a growth stock in Southeast Asia.

Investors’ interest in the region’s tech firms could be gauged well from Sea Limited’s (SE.US) stock price, which increased by 7.35 times since the COVID-19 low in March 2020 and shows no sign of slowing down. The company owns Garena gaming company and Shopee e-commerce. Each subsidiary is one of the biggest players in their respective fields in the Southeast Asian region. Sea Limited is now worth about US$ 168.8 Bn in enterprise value in August 2021, up from just US$ 15.9 Bn last year.

Indonesia has kickstarted its technology season

As the biggest and one of the highest growing economies in Southeast Asia, many venture capitalists have invested in Indonesia’s tech companies and eyed the debut of its first technology company on the stock market.

In early August 2021, Indonesia had its first unicorn tech listing, Bukalapak. This e-commerce company was valued at US$ 7.5 Bn and raised US$ 1.5 Bn, setting a new record as the biggest IPO on the Indonesian stock exchange. With that valuation, the company ranked among the top 25 biggest companies by market capitalisation. As a side note, the previous listing record was held by Adaro Energy, one of the world’s biggest coal companies who listed in 2008 with US$ 3.8 Bn valuation.

The listing of Bukalapak, however, had sparked some controversies between investors as they were divided into two camps: tech vs. value investors. The value investors argued that the company has not yet recorded any profits but already offered at an extremely high valuation and some see it as a way for VC’s to exit their investment by selling to public investors as the “greater fool”. On the contrary, those who belong in the tech camp welcomed this IPO as the first pureplay tech company listing. Nevertheless, the stock was oversubscribed by 4 times, reflecting investors’ enthusiasm in the company.

We estimated that the Indonesian stock market exposure to pureplay technology (excluding telco) is only 5.08% of the total market capitalisation in August 2021. Even more extreme, there is no tech stocks included in LQ45 index that represent the most liquid stocks in the country.

This is very low compared to the weightings of MSCI APAC and S&P 500 who had 38.4% and 26.8% contribution to the index, respectively.

Considering the high allocation of venture capital investments in Indonesia startups and the currently low weighting of tech stocks in the JCI Index, the arrival of an Indonesian technology stocks era is inevitable.

With many Southeast Asian technology companies planning to be listed soon and its underweighting of the sector in their regional stock markets, investors who understand how the game will be unfold can enjoy a significant advantage.

Those who are interested could learn from the development of the more mature technology companies that got listed in the USA, China, and India.

Could the shift of Chinese tech investors’ portfolios be a life-changing opportunity? Only time will tell.

“We can be knowledgeable with other men’s knowledge,

but we cannot be wise with other men’s wisdom.”- Michel de Montaigne