The aftermath of Luna and its stablecoin TerraUSD is no doubt more devastating than one would have imagined. The fallout reminded us about financial crises and how leverage could be a detrimental double-edged sword: while your investment return is maximised, so is your risk. In this aspect, DeFi is no difference than TradFi, but the mechanism, hiding behind all the ‘smart contracts’, is much less understood. We try to explain what happened and the implications in this blog.

The domino effect of the Luna fiasco began as Celsius, a cryptocurrency lender, froze customer withdrawals on their platform in mid-June and subsequently declared insolvent. On that same day, Binance, one of the largest crypto exchanges, also halted withdrawals from their exchange for a few hours before resuming them later in the day. While all eyes were fixated on the crypto lenders and exchanges, few noticed the looming of a bigger victim.

Singapore-based crypto hedge fund Three Arrows Capital (3AC) transformed into an almost exclusively crypto focused fund in 2018, 3AC initially focused on trading Bitcoin and Etherum in the derivatives markets. Over the years, 3AC has diversified its investment strategy and has become a force in DeFi by backing some of its most important platforms. It has invested in Solana, Ethereum, Avalanche, Aave and Terra, as well as GameFi names such as Axie Infinity and NFTs.

Being one of the largest investors in Luna (seeking for its attractive staking yield), 3AC suffered large losses on the back of its collapse. Industry report said that 3AC has bought 10.9 million locked LUNA for $559.6 million, which by June 2022, was worth $670.45. The firm failed to meet margin calls from its lenders as the market was facing massive selloffs, triggering unforeseen liquidations for the firm. 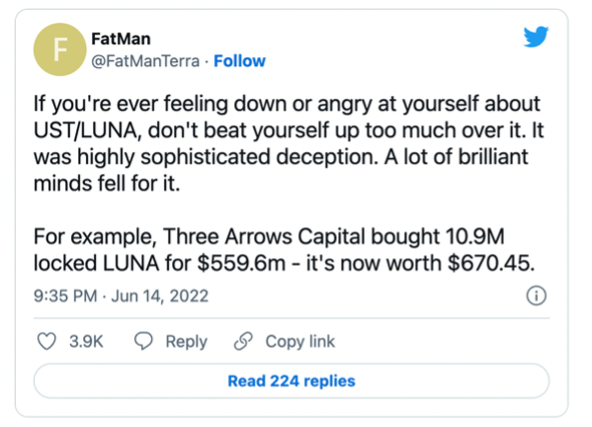 The chain effect of 3AC’s insolvency has led to multiple crypto lenders halting withdrawals from their platforms. Amongst the sufferers is Voyager Digital, which wears the broker, custodian, and lender’s hat at the same time. The demise of 3AC, which was one if Voyager’s biggest borrower, has ultimately led to the firm filing bankruptcy shortly afterwards.

The Money or Cryptocurrencies Flow Chart

But there can be more domino effects along the way as the complicated relationships reveal themselves through the epic centres of Terra and 3AC.
Source: Coindesk, Bloomberg Intelligence, Three Arrows Capital, Heyokha Brothers

What happened in this collapse echoed past financial crises. The dependence on assets that were overvalued or at massive risk of large price corrections, and more importantly, the greed and fear that overtook the market players, have been the same forces at work this time round. Greed led 3AC along with other crypto lenders to misjudge systematic risks and entered highly levered positions in assets the values of which are highly correlated with each through engineering supply and demand. So when one falls, all have brought to their knees.

Not only is this poor risk management, but also a reflection of the opaque world of DeFi (that can also be said for TradFi). Like any centralised crypto fund, 3AC does not share much about its inner workings, this means that market participants have no insights as to where, when and how these funds invest and leverage. For instance, the Monetary Authority of Singapore (MAS) has reprimanded 3AC for misleading information and exceeding asset under management (AUM) threshold. The fund’s asset holding was estimated range between $4-10bn, which exceeded more than 22-fold the permitted AUM of SG$250 million under its status as a registered fund management company (RFMC).

In the wake of the catastrophic collapse of TerraUSD (UST), hedge funds and crypto lenders, one after the other, regulators are now in a sprint to formulate regulatory frameworks, particularly for stablecoins. For instance, just three days after 3AC was ordered to liquidate, EU officials secured an agreement on the Markets in Crypto-Assets (MiCA) proposal which covers issuers of stablecoins, as well as trading venues and wallets where crypto-assets are held. Under the new rules, stablecoins will be required to maintain sufficiently liquid reserves to meet redemption requests in the event of mass withdrawal. The stablecoins will also be supervised by the European Banking Authority (EBA). This law implies the consensus that algorithmic stablecoins are the weakest among the four types of stablecoins we discussed in a previous blog post (link). For fulfil the requirements under the new law, algorithmic stablecoins will require legal tender backing. Despite a bumpy road ahead, we see the new rules as a positive movement overall, not only does it provide regulatory clarity and assurance, but also lowers the risk for abuse. Indeed, following the agreement, Shiba Inu and Aave both announced their plans to launch a stablecoin for their respective ecosystem. This shows that effective regulation is paramount.

Defi will evolve, but it will not go away

We have long been a proponent that it will be years until Web 3.0 or crypto economy to truly take off. What we are currently observing are many proofs of concept. Therefore, there are bound to be successes and failures along the way. The crypto winter we are facing now may be the perfect opportunity to clear the underbrush that could be kindling for the next firestorm.