Another gale of creative destruction 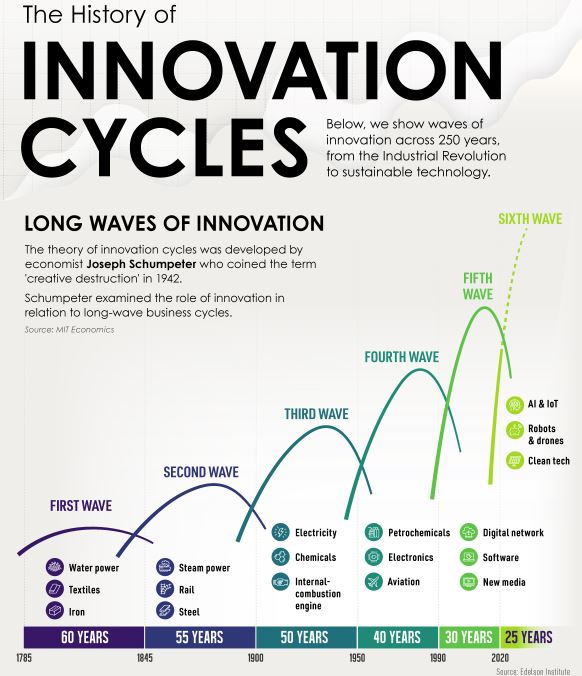 Web3 economy replaces the old and the new

Creative destruction is an inevitable process. Web1 made browsing data available to the average person. Web2 turned interaction of people, transactions, and contents into businesses (social media, e-commerce, video streaming). Web3 adds the internet of money and the internet of identity.

The economy, old and new today, will see unprecedented disruptions, and morph into an open and token economy under Web3. Blockchain revolutionalises the backend of the internet in the most important aspect – from centralisation to de-centralisation of data storage.

Organisations that stand in the middle of the peer to peer sharing of data can be removed. This goes all the way to trusted agents, platform service providers, security and governance providers, and even governments. The economy can be truly open.

How do we get here?

The second industrial revolution in the 19th century brought us electricity and mass production through assembly lines. It gave birth to well-established companies like Coca-Cola, Du Pont, and General Motors. Some investors call them old economy companies.

The distinction between the old and new economy firms primarily lies in their business model and mindset of operation.

Old economy firms are usually asset-heavy because their activities typically revolve around producing goods. By design, production capacity becomes the bottleneck to the company’s growth and utilisation becomes a priority. With high upfront capex established in the high-interest rate era (compared to today), their investors put cash flow generation as a top priority since day one.

On the contrary, the new economy firms are usually asset-light because of their open business model. New economy firms collaborate to create an ecosystem as the central source of value creation. As such, they do not invest heavily intangible assets like property, plants, and equipment. They share it with their partners through sharing arrangements or an as-a-service model.

The business model of new economy firms also operates on a per unit basis instead of capacity utilisation. This design enables them to scale up exponentially by developing higher adoption and stickiness of their ecosystem.

In terms of mindset, new economy firms are usually backed by investors who are capable to endure years of losses to catch a huge prize down the road. Instead of focusing on profitability since day one, cornering their market is their number one priority. Positive cash flows are expected to come after obtaining market dominance.

New economy firms harness novel technologies from the 3rd industrial revolution, i.e- personal computing and the internet, and apply them to an ecosystem-based business model.

Such novelty would not receive substantial financing from a traditional financial institution because of the high risk. This is when venture capital firms, high-risk appetite financiers specialised in funding early-stage companies, step in to support the innovation. There would be no new economy firms without these kinds of investors.

The development of the web and new economy firms

The development of the PC and the internet enables people to connect regardless of time and space. In the first generation of the web (Web 1.0) between 1983 to 1990, computers in the world were able to connect. The main purpose of the internet in Web 1.0 was to solely exchange information, scaling up the initial design of its founder Tim Berners-Lee.

Then, in the 1990s, some young entrepreneurs figured out that the internet could be used for more than just sharing information. Enter Web 2.0 era, the social web. These entrepreneurs created websites that became platforms for participants to share content and do commerce on the internet. The 3Cs namely: connectivity, content, and commerce would be the best way to describe it.

In the 1990s, Larry Page & Sergey Brin (Google), Jeff Bezos (Amazon), and Jack Ma (Alibaba) were all just young people with a vision back then. Due to their dedication and financial support from venture capitalists, we now have tech titans that shape our daily lives.

Digitalisation, decentralisation, and democratisation to be the next tech forefront

During the current web 2.0 era, we see that business competition has developed into a winner-takes-it-all game. In our 3Q19 report, we described how these business dynamics have increased inequality.

Wealth and power have never been this centralised. Tech companies to some extent could be more powerful than a government because of their extensive data ownership and strong access to capital, thanks to the generous market valuation and exceptional free cash flows. It leaves no room for the small guys.

Facing such issues, attempts to revert the centralisation of wealth and power have started both from regulators and the tech scene. We have seen numerous attempts by several governments from developed countries to curbs tech power through legislation. Closing taxation loopholes, data governance, and anti-trust regulation are some of the addressed issues.

We are of the view that digitalisation, decentralisation, and democratisation are the next tech trends driven by decentralised technologies. Below is our short introduction to the theme:

Digitalisation of contracts and transactions

Digital refers to the electronic storage and transmission of data. In the field of finance, data often means value. Digitisation (i.e. transforming non-digital data and records into digital format) has been going on for years and is still happening.

Digitalisation is not a product. It is a network of processes in which only digital data is created, processed, and stored. In theory, there is no need to regularly keep records and take snapshots (accounting) as unique full history can either be reproduced easily or in the case of blockchain, a full chain of historic records is a default output. When the digital data created represents a contractual relationship between two parties, it represents a value transfer.

Digitalisation suggests that contractual relationships can be created digitally. And if blockchain is used, it will also be secured and trusted, without the need of third parties to verify, approve and register them. The execution of digital contracts will be enforced by the whole network (checking and verifying) and not subject to manipulations. Therefore, it is trustworthy and secured. With such value proposition, on-chain contracts could be a norm in the future.

Decentralisation of network and governance

During the Financial Crisis of 2008, insane risks taken by big financial institutions were blowing up in their faces and the US government came to their rescue to the order of many billions of US dollars. At the same time, average US citizens were losing their jobs and being evicted from their homes, while the large institutions that created this crisis were being backstopped by government money.

The initial creators of Bitcoin did so explicitly with the intention to offer an alternative financial system that would be more democratic and governed by the truly immutable laws of cryptography and computing power, rather than the oft-bending laws of man.

The need for a fairer and more trusted system has never been clearer. Fast forward 10 years, in 2020, when the pandemic hit the globe, causing the loss of millions of jobs once again, the risks of the existing financial systems were exposed to every corner of the world and every walk of life. Bitcoin has entered the main street as an alternative financial system that cannot be manipulated by central agents. This is a strong anchor of decentralisation, a process that can only be delayed but not reversed.

Democratisation is the process of introducing the democratic system and principles to the financial infrastructure. This is in stark contrast to a centralized financial infrastructure. The creation of blockchain has not only made decentralised finance possible, but also has a wider implication of making decentralized property, arts, music, and lots of tangibles and intangibles possible.

Under this system, there is no dispute over fractional ownership, property rights, and legitimacy of creations and transactions. This is significant, as it greatly levels the playing field with extremely trustworthy and transparent value and allows peer-to-peer to directly engage in such transactions without huge costs of discovery, verification, and transactions.

The ability to own a fraction of something that is not represented by securities but the asset itself is something that will change the world under this democratisation process. When governance is truly decentralised and cannot be manipulated or faked, it represents the real value of trust.

Today’s Google and Facebook who monetise user data will also be challenged. Decentralised systems will not provide any data of great value to you unless with self-consent, on an active basis. Without the ability to unknowingly collect your metadata, Big Data will not be as valuable as claimed, and accordingly, AI will have much less applicable value. Limited data feed handicaps the machine’s learning ability.

Democratisation is in a sense returning financial power to the commons but not needing to use the centralised financial systems.

After all, another gale of creative destruction has arrived

With innovation continuing to spur, no one is safe from disruption. We are of the view that the next gale of creative destruction would come from decentralised technologies that would disrupt today’s new economy firms and enable Web 3.0. As such, the 3Ds will replace the 3Cs in the upcoming future.

Curious about what to expect in web 3.0? Stay tuned to our web 3.0 blog series.