Last week may mark the worst week in history to date in the crypto industry. The downfall of FTX, which was considered as one of the biggest and most reputable players in the market, has stunned all crypto owners.

Concerns for FTX’s liquidity spurred after the release of CoinDesk’s investigation on the close ties and blurred financials between FTX and Sam Bankman-Fried’s (SBF) trading firm, Alameda Research. It was revealed that Alameda Research held a position worth over $5 billion in FTT, the native token of FTX. It owned $3.66 billion of “unlocked FTT” and $2.16 billion of FTT collateral, combined making the biggest single asset held on its balance sheet. The report revealed that Alameda’s investment foundation was also in FTT, rather than an independent asset like a fiat currency or another crypto token.

An excel file FTX shared with prospective investors before the bankruptcy, providing a detailed picture of the financial hole in the FTX crypto empire.

On Nov 6, Binance, the world’s biggest crypto exchange, announced that it would sell its entire position in FTT tokens, worth over $500 million at the time. Unsurprisingly, FTX experienced a bank run following the announcement with customers demanding $6 billion of withdrawals. The value of FTT fell by 80% in two days.

Binance gave a short-lived promise of rescue on Nov 8 after corporate due diligence prompted concerns about the mishandling of customer funds. Having lent more than half of its customer funds to Alameda, it is reported that FTX has a shortfall of US$8 billion on its balance sheet.

Some may say that this fallout has destroyed all confidence and set the industry back again in the eyes of regulators and institutional investors. To us, the cause of the meltdown is simple, those who have been in the financial industry will know, asset-liability mismatch, period.

The clear lack of corporate governance has contributed to the non-existence of risk management at FTX. As reported by the Wall Street Journal, Ryan Salame, co-chief executive of FTX Digital Markets, and Ryne Miller, general counsel of FTX’s U.S. arm, alongside other FTX employees, had no knowledge of FTX’s problems until exposed by the media, despite worked closely with SBF. The lack of transparency and seemingly concentrated control in the founders’ hands are disconcerting. 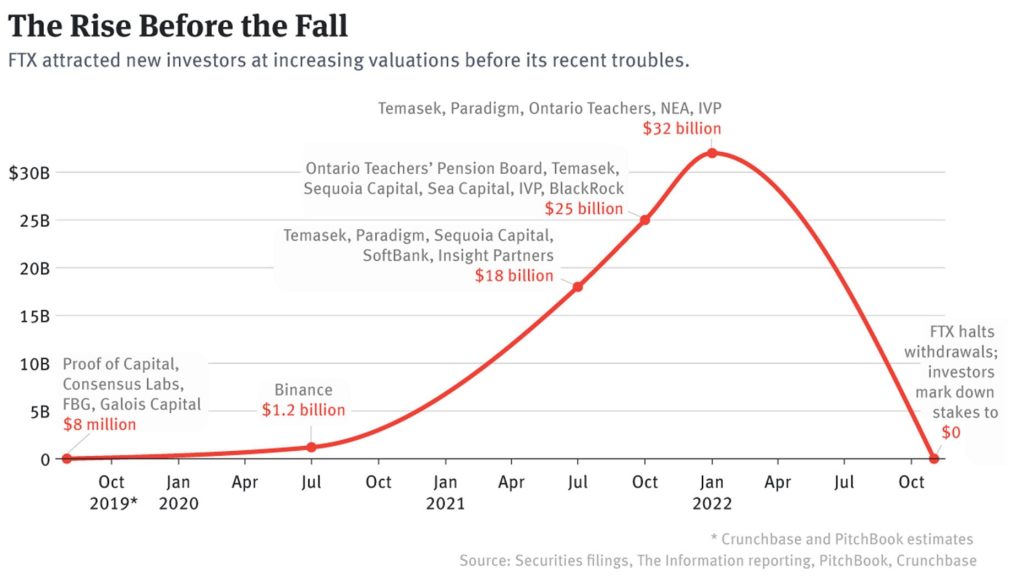 FTX suffered a $400 million hack which occurred on the same day the firm filed for Chapter 11 bankruptcy protection in the U.S. The internet was flooded with speculations that the hack could have been coordinated by insiders. The attacker appears to have “had access to all the cold wallet storages which he exploited,” Dyma Budorin, co-founder and chief executive of blockchain security auditing firm Hacken, said on Monday in an interview with CoinDesk TV.

Some of the wallets are labeled “fucksbf” and “fuckftxandsbf.eth”, which could be a reverse optics to appear as if it is a hack.

Similar to the Luna fiasco, we would expect a domino effect from the fall of FTX given the number of businesses in the ecosystem that are linked to the exchange. Genesis Global Capital has become the latest fallout from the FTX meltdown, reflecting a sign of contagion outside of BlockcFi, which is reportedly preparing for a potential bankruptcy filing. 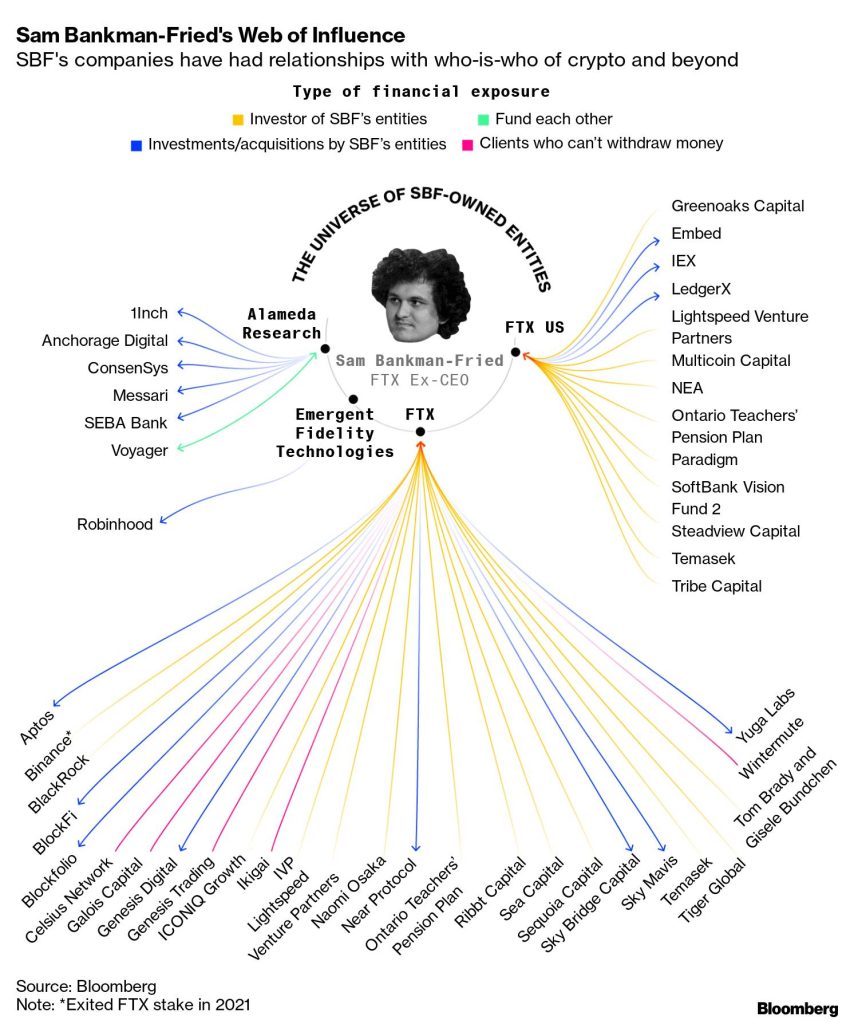 What to trust going forward?

Although it’s an extremely painful lesson to learn, individuals will now understand the importance of being their only owner of one’s digital assets. Crypto users are rushing to take control of their digital assets in the wake of the exchange’s collapse.  This will be better off for the market as a whole in the long run, to achieve the holy grail of decentralization, rather than being dependent on the notoriously centralized exchanges.

Indeed, there is evidence that crypto owners are increasingly moving to hardware crypto wallets. A major hardware wallet provider, Trezor, has recorded a major uptick in wallet sales in the aftermath of the FTX contagion. According to Josef Tetek, the firms’s brand ambassador Josef Tetek told Cointelegraph on 15 Nov, Trezor saw its sales revenue surged 300% week-on-week and it’s still growing.

And despite sell-offs, decentralized exchanges (DEXs) and decentralized finance (DeFi) platforms have been functioning smoothly and experiencing a double digit increase in the number of users in the past week. According to data share by Nansen to The Defiant, MakerDao, DeFi’s largest protocol with $6.5 billion of total value locked, has increased addresses by a third in the last week. And other top 10 protocols have also attracted huge jumps in users, with Aave notching a 70% increase, and a 63% spike for Curve.

Regulations are clearly needed for CeFi

The crypto community continues to learn the lesson of decentralization the hard way in the previous months. From Celsius Network to BlockFi, Voyager Digital, and now FTX, and probably more casualties to come, these are all centralized exchanges and financial platforms (CeFi). Similar to the situation of the 2008 falls of some of the largest American banks, we witnessed the consequence when market players under-collateralize and take risks with consumer funds. The only difference this time is that there is no government backing in the CeFi world, the CeFi companies are left to play out by themselves.

The collapse of FTX will spur more calls and urgency for crypto regulations. Both CFTC and SEC are experts in regulating the financial markets. What the regulators have essentially been trying to do is to replicate the regulatory framework for the traditional financial (TradFi) market to the crypto market, at least for CeFi, which would be challenging. The Federal Reserve took six years to create after the 1907 Wall Street panic, so it will not be surprising if it takes few years to come up with the regulations for CeFi.

The flaw in CeFi is that the reliance on trust that Satoshi Nakamoto was trying to avoid has been reintroduced. The collapse of FTX once again reminds us of the importance of decentralization. DeFi platforms are designed to preserve transparency and self-sovereign custody of assets. Regulations that do not overprotect those with an upper hand could be beneficial for the industry. Although unclear with the approach yet, we believe the crux of regulating decentralized projects would be to regulate on a protocol level rather than on an entity level. Nonetheless, the ultimate solution remains to leave governance in the hands of consensus mechanisms.

The meltdown of FTX was a failure of CeFi, not DeFi. If there is a silver lining for the FTX meltdown, it would be to redraw the ecosystem’s focus on its original purpose of decentralization, reaching consensus on who owns what cryptographically across nodes rather than relying on a central source of trust.

CZ Strives to Show Binance is Different From FTX. The Defiant.