The lurking opportunity from China’s clampdown on tech companies

The Chinese word for Crisis (危机, read: Wéi Jī) is the combination of the words “Danger” (危险, read: Wéi Xiǎn) and “Opportunity” (机会,read: Jī Huì) philosophically suggesting that there is always opportunity in every crisis.

The clampdown by the Chinese government and stricter compliance requirements by the US SEC has created a perfect storm for Chinese tech companies. 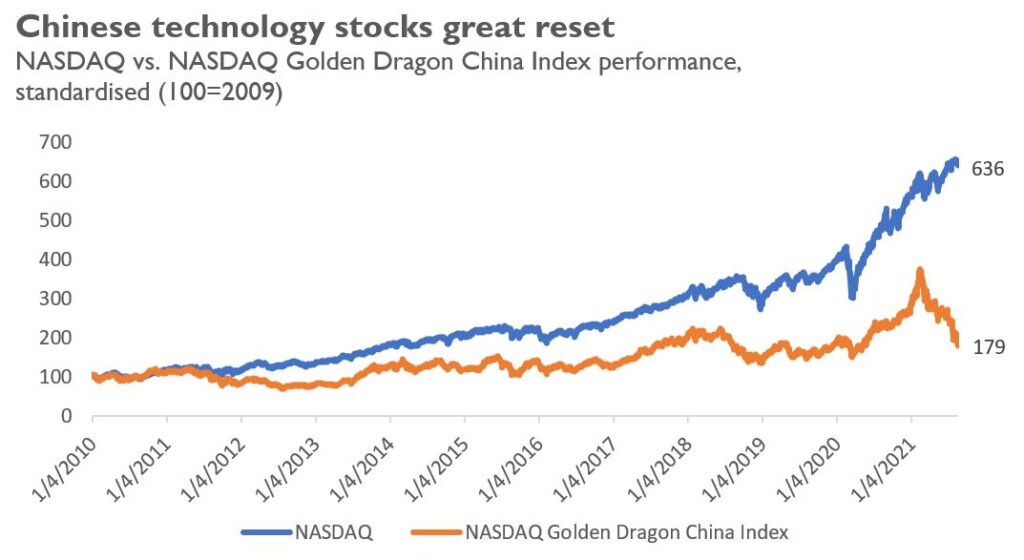 Hundreds of billions in market value vanished within months as a result. Kraneshares China CSI Internet ETF (KWEB.US) has fallen by 56% from its peak in February to 19 August 2021. Stock prices of big names like Alibaba (BABA.US), Tencent (700.HK), JD (JD.US), Pinduoduo (PDD.US), and the recently publicly listed Didi Chuxing (DIDI.US) have fallen by 40% to 50%. Even more extreme, names like Joyy Inc. (YY.US) and New Oriental Education (9901.HK) saw their stock prices fall by more than 70% from their highs.

Is this big sale justified or does it represent a bargain-hunting opportunity instead?

The Chinese government is exerting its role as a great equalizer

It is clear that the Chinese government possesses the ability to put their local tech companies on their knees. Their clampdown targeted companies in various tech-sectors, such as e-commerce, fintech, gaming, delivery platforms, and edutech. Given the massive consequences, we asked ourselves why this action is necessary in the first place.

The rise of today’s tech titans begun in the US in the 1980s. It was kickstarted by the development of personal computers and the internet. At first, the vision of tech companies was simple. They were addressing the pain points of society. Fast forward several decades later, digital businesses such as e-commerce, social media, digital media, ride-hailing, and XaaS businesses have reduced many frictions in our daily life.

Despite the benefits, tech entrepreneurship has reduced equality. As more capital became available to finance innovative ideas, competition got fiercer. Most tech entrepreneurs must play in a winner-takes-it-all game. The winner will obtain most of the market share with competitors lagging far behind. Winning in the game also means better access to resources like user data and capital that arrives in form of exceptional free cash flows or a generous valuation. Data and capital become the seeds and fruits for venturing into tech businesses.

It is important to note, these tech titans remained agile despite their size. Small businesses only have a slim chance to compete with them.

Considering the improvements that technology companies have brought to the economy, we think it is unlikely that the Chinese government aims to shut down its internet sector. Reflecting on the worsening inequality in the US that is partly driven by tech companies, it is sound for any government try to avoid that trajectory. History has shown that extreme inequality will hinder economic growth and develop social unrest.

From the perspective of building an ideal nation, these clampdowns actually serve a greater good by promoting equitable economic growth, preventing abusive monopolistic power, protecting consumers rights, providing data protection, and enhancing national security. We see these objectives to be similar with what the United States and European Union trying to achieve. However, the Chinese government acted faster because of their single-party system while other legislative institutions in the West were still debating on how they could regulate the tech sector for the last decade.

We should note that the lack of regulation had been facilitating the extraordinary growth of most tech companies. Exploiting user data, avoiding taxation (to some extent), and leveraging ecosystem exclusivity are some of the examples. These advantages will be taken away for Chinese tech stocks and their valuation has adjusted accordingly.

The new regulations on user data security and enforcement of fair trade (i.e- the crackdown) eliminates some of China tech companies’ growth hack tricks. As such, investor’s may justifiably reduce their expectations on the China technology companies’ growth prospects because of the new rule of the game. However, we are of the view that this crackdown is not the end of China tech stocks.

The new regulation could translate into a lower top-line growth rate but a healthier bottom-line and more productive economy. Case in point, imagine if the culture of attracting customers by ‘burning money’ ends. Without excessive marketing and subsidy, China tech companies will have to rely heavily on their product quality and efficiency as the source of customer acquisition. Should this circumstance occur, the incumbent players will now have a better chance to compete as they face the tech companies’ true pricing instead of a subsidised one. Thus, tech companies’ profit margin could be healthier and national productivity also could benefit from efficiency-and-innovation-driven competition.

Furthermore, completely shutting down technology companies is inherently counter-productive to what the Chinese government has tried to build. After achieving monumental poverty eradication and industrial revolution since the 1960s, this might be just the right time for the Chinese government to start closing the wealth gap. The Covid-19 pandemic recovery has been K-shaped. A huge chunk of brick-and-mortar and mom-and-pop businesses have been absorbed by e-commerce firms.

On the other hand, the government is promoting ‘new infrastructure’ sectors including semiconductors, renewable energy, and AI as indicated in the 100th anniversary of the Chinese Communist Party. It also has promoted health-tech companies in one of the government policies to improve healthcare quality in the country. This fact shows that the government is not anti-tech but intends to curb the side effects of the inequality it produces.

We do not see the current big sale will turn into a classic mean reversion play because the rule of the game for China tech companies has changed. Instead, the Chinese crackdown has caused investors to reconsider their portfolio allocation. Some will remain invested, and some will leave the market entirely.

We believe that those who remain invested might shift their capital into technology names that truly improve the nation’s productivity such as technological infrastructure and deep technology names or the ones with regulatory-compliant business model. Through this rebalancing, they can reduce the regulatory risk in the future while leveraging the growth of China’s economy in the tech space.

Meanwhile, discouraged China tech investors might shift their portfolio allocation towards US tech companies or Southeast Asia tech companies that have a similar high-growth profile and less regulatory risk as they are still in the early days.

How lucrative Southeast Asian tech companies could be?

That will be our discussion for next week. Stay tuned!

“There is a bit of conspiracy, and of authoritarianism, in every democracy; and a bit of democracy in every dictatorship.” – George F. Kennan