The end of the decade of plenty?

In the past, that is not too distant was a decade of abundance, peace, and order. Food, energy, resources, and capital were plenty and affordable if not cheap by today’s standards. Today, we have the exact reverse.

Six months ago, we wrote about the rising food security risk globally (link). Since then, food prices have cooled down in the wake of recessionary fears driven by the global central bank tightening cycle. The FAO food price index has fallen by 14.7% in USD terms from its peak in April 2022.

The question: is the food security risk now no longer a concern?

Furthermore, the recent surge of the US dollar actually has worsened the food security risk for many countries. At the same time whereby the FAO food price index fell by 14.7 percent from its March 2022 peak, the dollar index rose by 21.5 percent. This means that most countries experienced a 3.65 percent higher food prices. It was no relief.

While the almanack that we provide might feel disturbing if not stomach-churning, we think that the mounting pressures of food security could signify the value of food technology. A vertical that has perhaps been taken for granted in the decades of plenty. Ironically, it is also the sector that allows humanity to thrive and defy the infamous Malthusian catastrophic prophecy.

Malthusian prophecy and its 180-degree reality

Students of economics would have been familiar with the Malthusian Trap. The 18th-century British philosopher and economist Thomas Malthus was well-known by the history book for his grim prediction in 1798. Malthus argued that food production will not be able to keep up with the growth of human populations. As a result, disease, famine, war, and calamity are seen as humanity’s inescapable fate.

Proponents of this school of thought might resort to an extreme solution to this problem like extreme population control. This reminds us of Thanos, the villain of the Marvel Universe, and his conquest to wipe out one-half of the universe’s population to maintain prosperity and peace in the galaxy.

Fortunately, the reality has fared better than the doomsday prediction. Humanity has prevailed and continued to expand the frontiers of welfare. For instance, Our World in Data showed that life expectancy has more than doubled from 29 years old in the 1800s to 71 years old in 2015. At the same time, the global population went up sevenfold from about 1 billion to 8 billion in 2022. 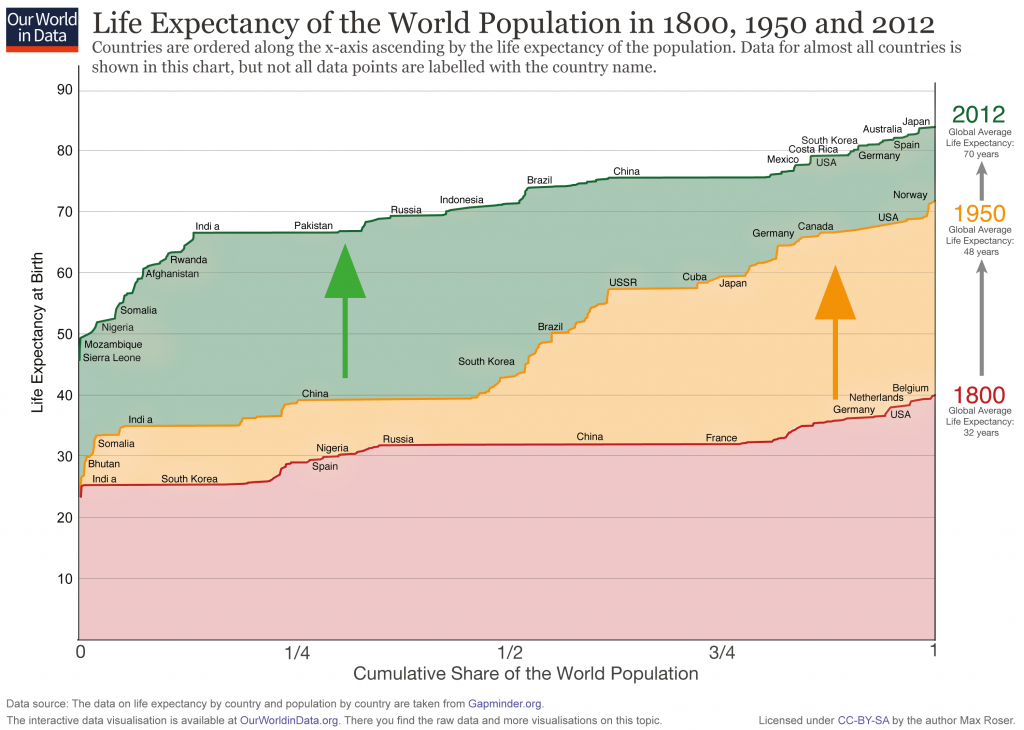 Moreover, data from the 1820s to 2015 suggests that the poverty eradication curve is getting steeper rather than flatten. The share of the global population that lives in poverty plunged from over 94 percent in 1820 to 9.6% percent in 2015. 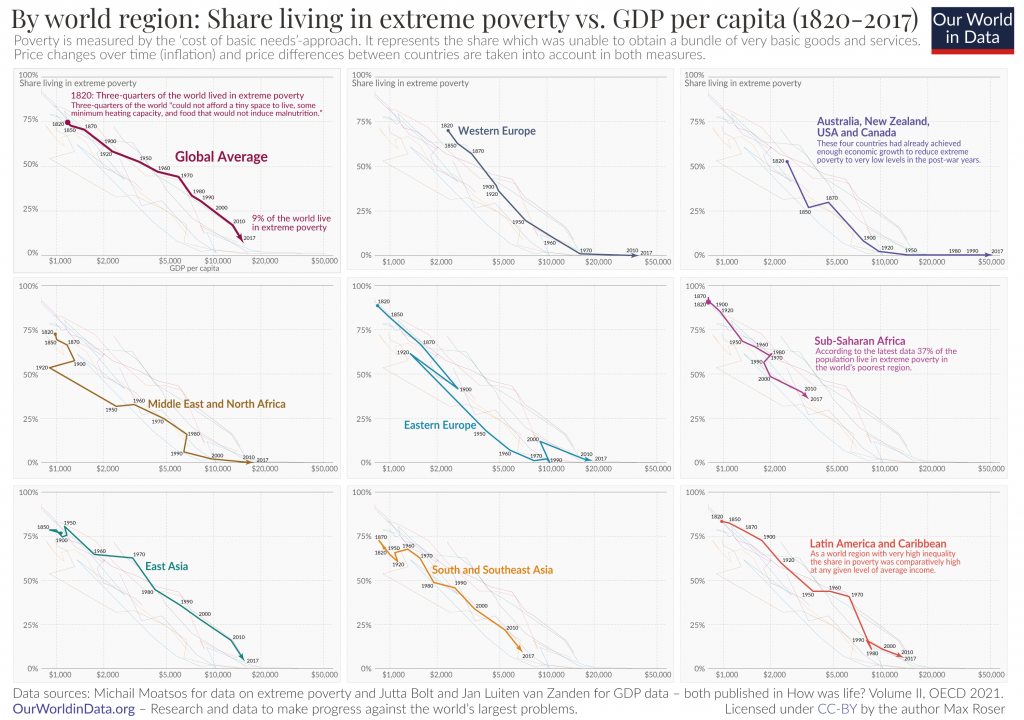 These are signs that indicate the world’s productivity has exceeded the growth of the population. What went different from Malthus’ view?

The uncounted factors that matter: the man-made miracles

Robert Malthus’ theory of growth lacks respect for the fundamental reality of technological progress. This is implied by assuming that food production would only be growing at an arithmetic progression. In reality, innovation and technology have pushed the boundaries and changed the course of history. Especially in the front of productivity.

One of the cornerstones of modern food production lies in ammonia which contains nitrogen and hydrogen. Nitrogen is one of the most important crop nutrients, a secret sauce of yield improvement. Ammonia can effectively bind nitrogen to be applied directly on crops or to be processed further for fertilisers like urea, DAP, and NPK. 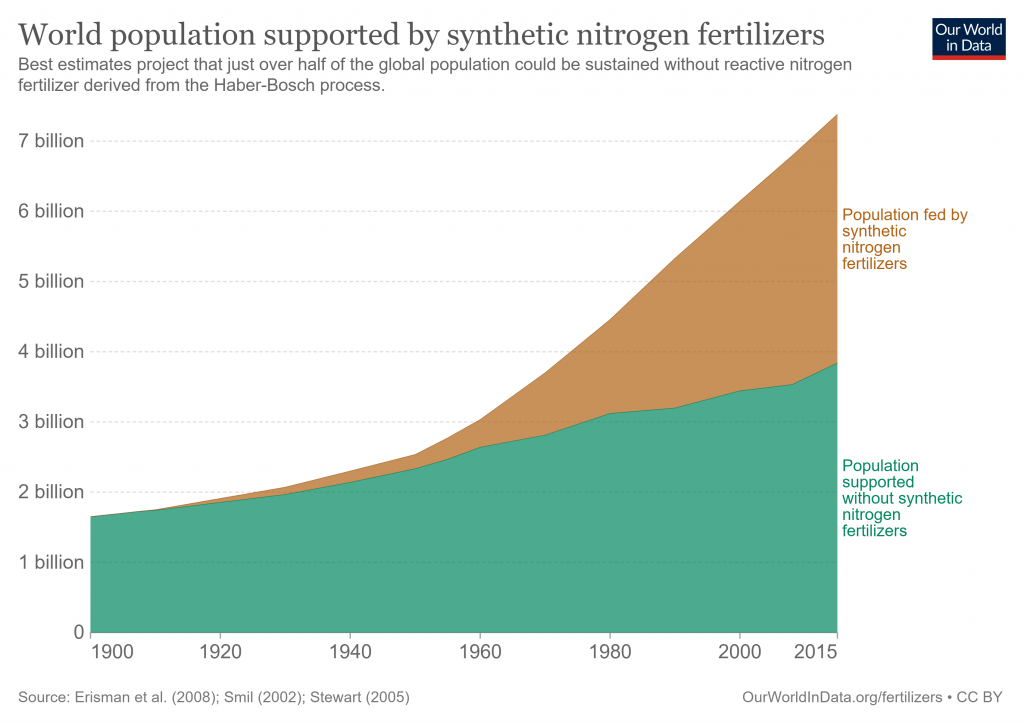 The advent of haber-bosch process in 1908 allowed the synthetic production of ammonia. ­It is a game-changer and worthy to hold the title of one of the greatest inventions of the 20th century. Erisman et al. (2012) estimated that the existence of nitrogen fertilisers have helped to feed 48 percent of the global population in 2008. In today’s number, that is equal to 3.8 billion people.

Back in March 2022 blog (link), we discussed ammonia as the main feedstock of fertiliser was caught in a perfect storm of geopolitical conflict, energy crisis, tight agricultural market, and supply chain constraint.

So far, we see a minimum disentanglement of these factors. As such, that might keep ammonia prices at elevated heights for a long time. Note that fertiliser crisis could cause a decline in the harvest that will worsen the global food stock. 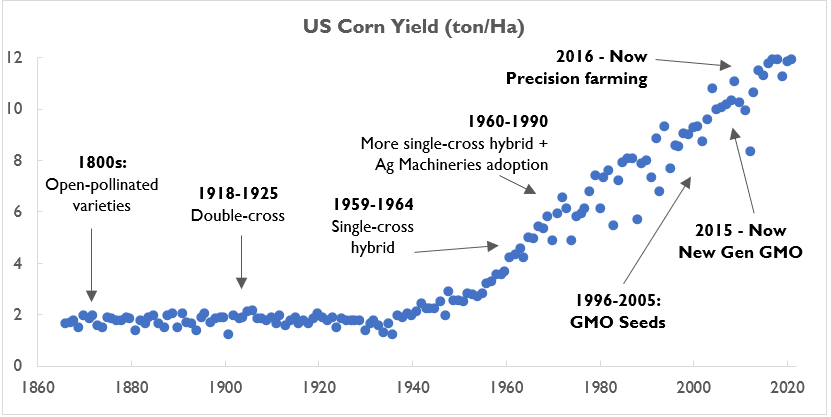 You reap what you saw. Seeds technology plays a vital role in fulfilling global food needs mainly through variants of better vigour and productivity.

In the case of the US, seed technologies have played an enormous role in jacking up the corn yield from merely 2 tons per hectare to 12 tons per hectare, a six-fold increase. This is a perfect showcase of what 160 years’ worth of long and continuous research effort could bring, defying the Malthusian trap.

In that regard of such immense research effort and multi-billion research budget, we perceive seeds technology businesses to be something secular whose profits are beyond justifiable for society. Their business enhances the economics of farming and helps feed the world in the process.

The advent of gene editing technologies (CRISPR) and super-computer could expand the frontier of seed technology in form of genetic modified organism (GMO) and genetic-edited (GE) seeds. Recent article from Financial Times (link) reported that gene-editing using CRISPR technology could cut product development cycle (variety development including regulatory approval) from 16.5 years to 5 years and research budget from $115 mn to $ 10.5 mn per product. Compared to GMO, gene editing using CRISPR is more precision in terms of adding or cutting the gene. Nevertheless, the technology mastery is still limited to a few and still in due process for more regulatory acceptance. Genetic-edited crop is the new unexplored frontier.

Besides fertilizers, the development of chemicals in crop protection has also contributed to feeding the world. For instance, pesticides could improve crop quality and increase crop yield by 30 percent on average (Bromilow, 2005). Pesticides are not something new, it has been widely used since the last 1940s.

Unfortunately, most crop protection products also require petrochemical-based feedstock. This suggests that a severe and prolonged energy crisis could adversely impact global food security by affecting the affordability and availability of fertilisers and crop protection chemicals. From that point, a vicious cycle in global food security could emerge from the subsequent decline in crop yields.

A difficult but hopeful journey ahead

It has been an adage of the investment world to invest in the pain points. Crop solution companies are essentially the direct solution to the looming food security risk. These companies range from fertilisers, seeds technology, and crop protection chemicals.

Given the R&D barrier of the business and the deeper pockets of the farmers, crop solution companies would be one of the few businesses that can thrive in this era of inflation. Crop solution companies’ pricing power is bound to rise in times like this. It is pretty obvious since crop solution products are the must-have ingredients for farmers to extract the risk premium and the cure to the crisis itself.

Although the short-term outlook might be difficult, the long story of humanity would suggest that this is a beginning of a hopeful tomorrow. Today’s market risk premium unveils the challenges and opportunities that lie ahead of us. It’s been years since capital was substantially directed toward resources, the bedrock of civilization. We believe persistent commodities’ risk premiums will redirect the capital into sectors that become the seeds of the next decade of plenty.

Ritchie, Hannah;. (2017, November 07). How many people does synthetic fertilizer feed? Retrieved from Our World in Data: https://ourworldindata.org/how-many-people-does-synthetic-fertilizer-feed